By Bryony Jewell For Mailonline

Airline passengers had to hold down an evacuation chute when it wouldn’t stay still in strong winds after their flight made an emergency landing.

Spanish low-cost airline Vueling flight VY2118 from Malaga to Barcelona landed at midnight on Friday after smoke started to fill the cabin.

Footage filmed at El Prat airport shows chaotic scenes on the tarmac as people get off the aircraft and one of the evacuation slides blows around.

Passenger Javier Calderon said some passengers had to grip the chute so others could disembark from the smoke-filled flight. 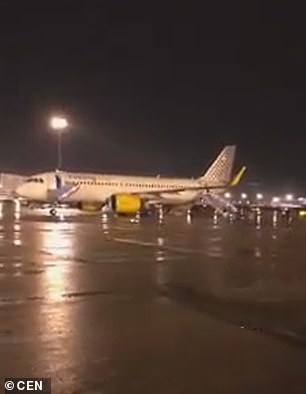 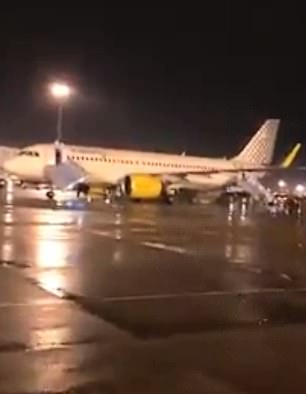 Passengers had to help hold down an escape chute which was blowing in strong winds, left, after their flight from Malaga made an emergency landing. After disembarking at the rear of the aircraft, left, several people ran towards the front of the plane to help others

He told local media that the crew appeared to be acting without any protocols but two Ryanair workers, who were travelling on the flight as passengers, provided help to the Vueling team.

El Prat Airport is located 12 kilometres (7.5 miles) from Barcelona’s centre and video from the incident shows the evacuation of the aircraft.

Dozens of people can be seen walking around the plane as others hold down a slide and someone else comes down it.

In another clip the slide on the front left-hand side of the plane is seen blowing in the strong wind as people disembark from the rear.

Vueling staff were quoted in local media as saying flight VY2118 landed ‘without problem’ and that the evacuation slides were activated for the passengers.

Following ‘safety procedures’, the Vueling pilots asked to land at El Prat Airport as a matter of ‘priority’ after the fault was detected. 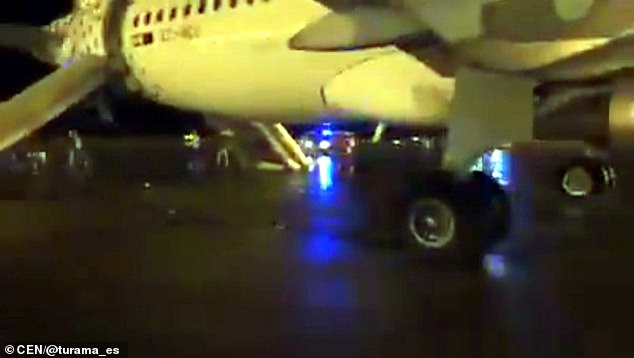 Several people can be seen standing on the tarmac after getting off the plane at midnight on Friday. Passenger Javier Calderon said crew appeared to be acting without any protocols 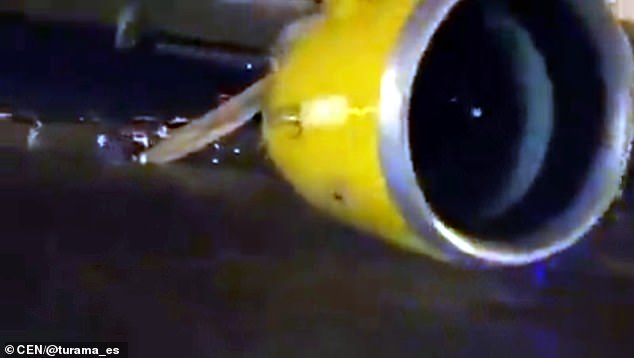 Vueling flight VY2118 to Barcelona landed around 20 minutes after smoke filled the cabin, according to passengers. Pictured is the front escape slide being held by two people

Mr Calderon said smoke was noticed in the cabin around 20 minutes before they made the emergency landing.

Cabin crew asked the passengers to ‘cover their nostrils with their hands and to keep their heads lowered as much as possible’, according to Mr Calderon.

By the time the plane landed the cabin had a high concentration of smoke and several passengers were said to be experiencing panic attacks.

Passengers also complained that they were told nothing about where the smoke came from or how to descend the evacuation slide with youngsters.

Mr Calderon said there was an ‘absence of airport personnel at the end of the ramps to help evacuations’ meaning passengers were helped by others on the flight.

Mr Calderon said that the passengers were kept at the airport until after three in the morning, reports El Pais.

Vueling and the local authorities are investigating the incident. It is currently unclear what caused the smoke.

Photodynamic Therapy Market to See Huge Growth at a CAGR of...