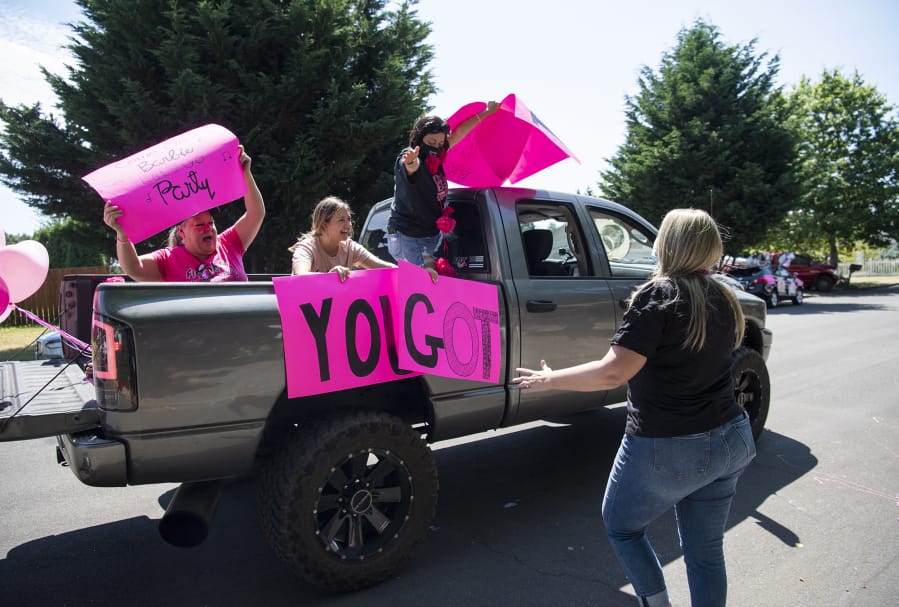 Tears started to well up in Heather James’ eyes as the last of dozens of vehicles decorated with pink ribbons and hand-painted signs reading “Kick cancer’s ass” and “You are loved” passed her home in Felida on Saturday afternoon.

“I’m overwhelmed and full of gratitude,” James said. “I was just told to be prepared. I didn’t expect this, but I have the best co-workers, friends and family.”

The parade was organized by two of those friends who hoped to show her that despite the isolation caused by COVID-19, James’ social and professional circles were thinking of her well-being as she battles aggressive breast cancer.

James said she was diagnosed with an aggressive form of ductal carcinoma in early April. She was showering and went to wipe a drop of conditioner from her breast when she felt a lump. Within 30 minutes, she was at the hospital undergoing tests. Within a week or so, she was well aware of her illness and the intensive treatment it would require.

Life has been tough. Not only was she told the tumor was getting larger after her first round of chemotherapy — a surprise to her two doctors, who decided to send a sample to the OHSU Knight Cancer Institute in Portland — but she’s had to go to many of her appointments alone due to coronavirus health guidelines.

The well-wishers were longtime friends of James, a lifelong Vancouver area resident, and her colleagues from nLIGHT, where she works as the executive assistant to the CEO.

They gathered at Columbia River High School around 2 p.m., forming a line of cars that drove west from the school, taking several turns before reaching James’ home on Northwest 106th Street.

The parade was led by three people holding a banner that read “Heather’s Parade.” Car windows showcased sentimental pictures. Rabbit’s ears stuck up from the sunroof of one vehicle, a reference to James’ nickname, “Bunny.” nLIGHT co-founder Mark DeVito sat in an inflated pink flamingo strapped to the bed of his pickup truck as the theme song from “Rocky” blared from his stereo.

Melissa Taylor, a former colleague at nLIGHT and a friend, said she was worried about James, whom she described as a very social person, going through cancer treatment without the kind of face-to-face support that would have been possible before the pandemic.

Taylor said she wanted to show her support in a way that goes beyond phone calls or chat messages. People from both sides of James’ life stepped up, she said.

“She’s always the first person to help others,” Taylor said. “She raises her hand whenever someone needs something, without question. So in a way, it’s like everyone is returning a favor they owe, because I’m sure they’ve all been helped by Heather in one way or another.”

She is also hoping that the parade inspires others during these difficult times.

“The world is different, but it’s not like we can’t do anything,” Taylor said.

Christina Stewart, who has been friends with James for two decades, echoed the praise. James’ empathy draws people into her life, Stewart said. When she and Taylor started reaching out to people who might be interested in participating, everyone contacted was enthused and willing to spend part of their weekend to help.

Before taking off from the school’s parking lot, some of James’ co-workers said they’d been feeling isolated because of the pandemic and having to work from home. Doing something nice for their colleague was a much needed reprieve, they said.

“She’s tireless, selfless toward everyone else. It’s disappointing that it’s hard to do more right now, but I’m glad that we were able to do this,” said friend and former nLIGHT co-worker Mike Boston.

nLIGHT remains open for business. According to the company’s website, it is following state and federal health orders and Cybersecurity and Infrastructure Security Agency guidance that permit nLIGHT to operate as an essential business.

Employees who can work from home are doing so, said CEO Scott Keeney. The company employs about 500 people locally and 1,000 people worldwide. Managing the company through the pandemic has been a challenge, he said.

Keeney said James is a key member of his team. She is instrumental in a wide range of goings-on at nLIGHT, including the culture, he said.

“She’s a gem. She facilitates friendships and has established many bonds in the community,” he said.

James said she was grateful and overwhelmed by the parade.

“I’m not good at accepting help from other people. I like to be the one giving it,” she said, wiping a tear from her eye.

Many Older Adults ‘Overscreened’ for Cancer