Sky News sports presenter Jacquie Beltrao has said it was a ‘kick in the guts’ to be diagnosed once again with breast cancer because she thought her lifestyle changes would prevent the illness from returning.

Former Olympic gymnast Jacquie, 55, from Dublin, revealed in June that the cancer she first had seven years ago had come back in a ‘more aggressive’ form and appeared on Lorraine this morning with her daughter Amelia, 22, to speak about her diagnosis.

The mother-of-three revealed she thought making changes to her diet and lifestyle would ‘be enough’ to stop her cancer coming back, and found it ‘really hard to deal with’ when her illness returned.

Jacquie explained that while physically she felt fine, mentally she was ‘out of the game’ and felt unable to do everything she normally would as a mum, such as shopping and cooking. 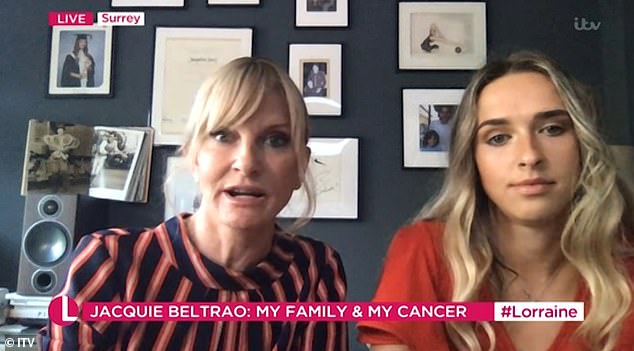 Sky News sports presenter Jacquie Beltrao, 55, has revealed she felt it was a ‘kick in the guts’ to be diagnosed once again with breast cancer (pictured with daughter Amelia, 22,)

Speaking of her second diagnosis, she said: ‘It was a total kick in the guts. I had made changes to my lifestyle, I was dairy-free, I do yoga all the time… I thought I had done enough to stop it coming back.

‘It sort of doesn’t work like that, it’s something internal, something that I’m obviously prone to.

‘I think if you have had breast cancer before you are also a little bit more prone to it as well.’

The mother admitted it felt like she was ‘losing her mind’ after discovering that her cancer was grade three stage four, meaning she’ll likely be dealing with it for the rest of her life. 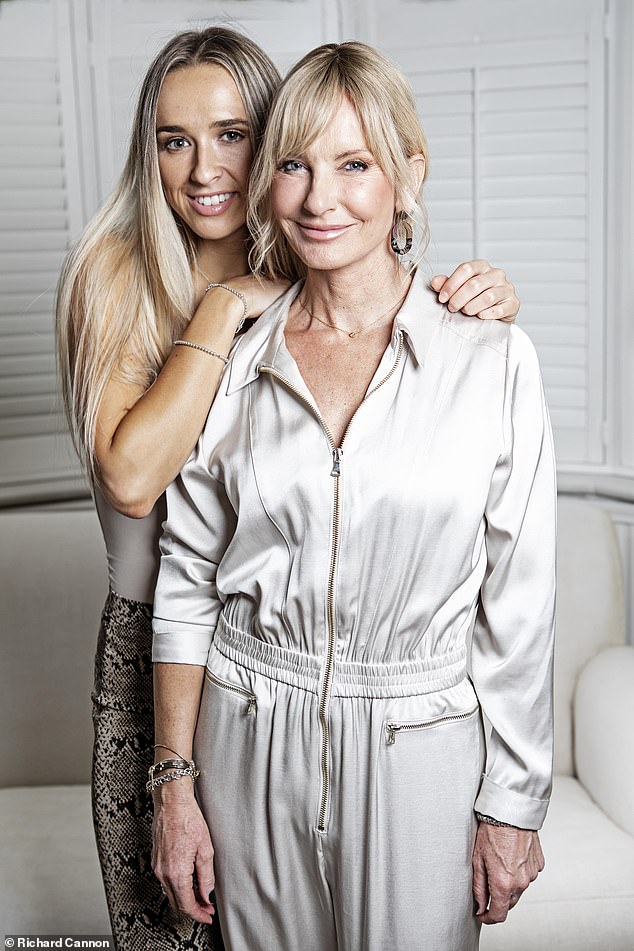 ‘It was really hard to deal with at first because it was worse than last time’, she told,  ‘it was more aggressive.

‘It’s a grade three stage four, which means I will probably be dealing with this for all of my life.’

She explained: ‘I thought I was losing my mind. It was a really hard thing to deal with mentally, physically I felt absolutely fine. But mentally I was out of the game. 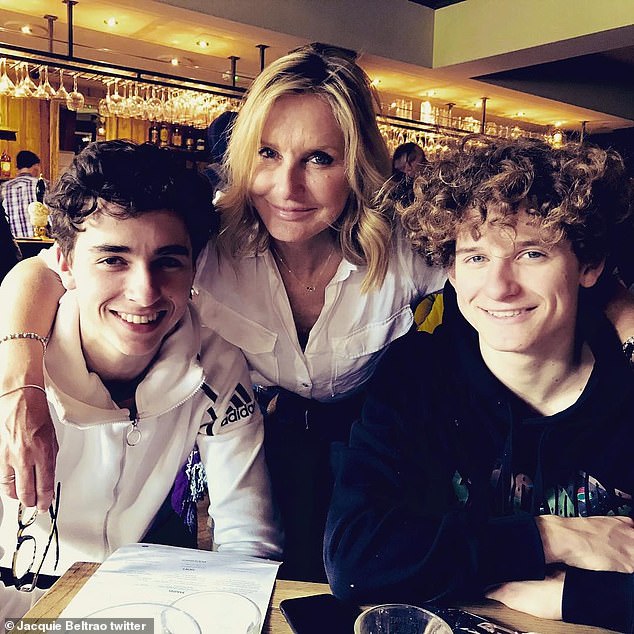 Mentally Jacquie said she ‘out of the game’ and felt unable to do everything she normally would as a mother, such as shopping and cooking. Pictured with sons Jorge (left) and Tiago (right).

Jacquie has been sharing her treatment over social media, and admitted that a positive outlook helps her ‘kid herself into thinking everything is fine’.

She said: ‘I’m sort of trying to kid myself that I am fine. Everything’s going to be fine and I’m going to be here when I’m 90, and if I keep saying it often enough in my head it must be true.’

Her daughter Amelia went on to explain that since her mother was diagnosed for a second time, she has tried her best to take on more responsibility, and be a ‘rock’ for her mother.

She told: ‘Obviously, first time round I was very young, only 16. I wasn’t as involved in the process. Mum and Dad tried to keep it hidden from us, in terms of how they were dealing with it. 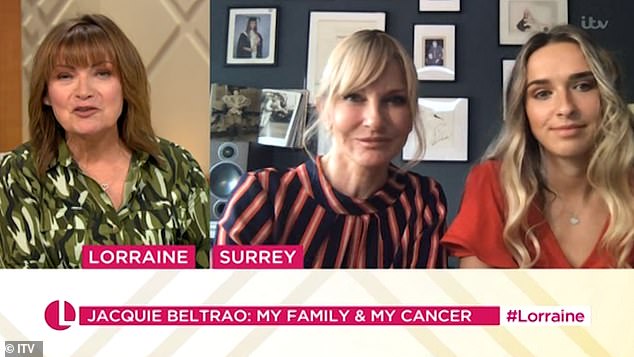 ‘This time around I sort of felt like I had to step up and be more of an adult, I’m 22 now. I know what is to come, I’m meant to be their rock.

‘It was a lot more responsibility I feel this time round, but I’m glad I did it.I thought I needed to give Mum an easy ride as much as I could.’

She added that she has taken over cooking and cleaning responsibilities, saying: ‘I don’t mind doing it, I quite enjoy doing it. As long as it made Mum feel more relaxed during the process, that’s all that matters.’

The presenter said the news had brought her family closer together, because most busy teenagers are usually focused on exams and seeing their friends.

She said: ‘At this point I feel like I have got Amelia back. She has been amazing throughout this whole time.’ 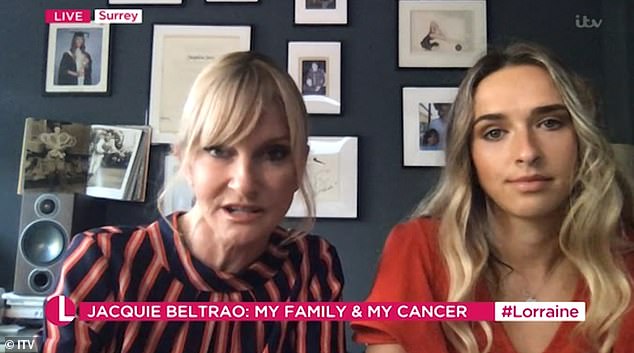 Jacquie has now undergone 12 sessions of chemotherapy since her latest diagnosis, and speaking about having treatment during a pandemic, admitted that she was lucky to be diagnosed when she was

Jacquie has now undergone 12 sessions of chemotherapy since her latest diagnosis, and speaking about having treatment during a pandemic, admitted that she was lucky to be diagnosed when she was.

She told: ‘In a way, I was very lucky with the timing of when I found the lump, it was pretty much at the end of when we were coming out of lockdown.’

She said she was rushed in and had treatment straight away, but that it wouldn’t have been the case if she had been diagnosed at any other point.

‘I was in a state of absolute internal panic’, she said, ‘If I couldn’t have had my treatment, I was almost losing my mind anyway.

‘I feel so sorry for so many people who didn’t get what they needed when they needed it. It was a really bad situation if you had breast cancer at certain points during lockdown.’

What is breast cancer?

Breast cancer develops from a cancerous cell which develops in the lining of a duct or lobule in one of the breasts.

When the breast cancer has spread into surrounding breast tissue it is called an ‘invasive’ breast cancer. Some people are diagnosed with ‘carcinoma in situ’, where no cancer cells have grown beyond the duct or lobule.

Most cases develop in women over the age of 50 but younger women are sometimes affected. Breast cancer can develop in men though this is rare.

Staging means how big the cancer is and whether it has spread. Stage 1 is the earliest stage and stage 4 means the cancer has spread to another part of the body.

The cancerous cells are graded from low, which means a slow growth, to high, which is fast growing. High grade cancers are more likely to come back after they have first been treated.

A cancerous tumour starts from one abnormal cell. The exact reason why a cell becomes cancerous is unclear. It is thought that something damages or alters certain genes in the cell. This makes the cell abnormal and multiply ‘out of control’.

Although breast cancer can develop for no apparent reason, there are some risk factors that can increase the chance of developing breast cancer, such as genetics.

What are the symptoms of breast cancer?

The usual first symptom is a painless lump in the breast, although most breast lumps are not cancerous and are fluid filled cysts, which are benign.

The first place that breast cancer usually spreads to is the lymph nodes in the armpit. If this occurs you will develop a swelling or lump in an armpit.

How is breast cancer diagnosed?

If you are confirmed to have breast cancer, further tests may be needed to assess if it has spread. For example, blood tests, an ultrasound scan of the liver or a chest x-ray.

How is breast cancer treated?

Treatment options which may be considered include surgery, chemotherapy, radiotherapy and hormone treatment. Often a combination of two or more of these treatments are used.

How successful is treatment?

The outlook is best in those who are diagnosed when the cancer is still small, and has not spread. Surgical removal of a tumour in an early stage may then give a good chance of cure.

The routine mammography offered to women between the ages of 50 and 70 mean more breast cancers are being diagnosed and treated at an early stage.

Naples breast cancer survivor helps those who helped her